Those that actually know me know that I love to eat out.  I mean L-O-V-E, like I would eat out every single meal of every single day if I could afford to, both financially and health-wise.   So, I think it might come as surprise to some folks that I have finally, after 56 years of the Joy of Eating, found the Joy of Cooking. 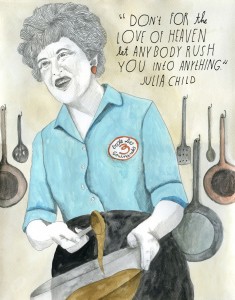 First, I had to learn that recipes are meant to be followed.  Early on, I figured that if I didn’t have one ingredient, what real difference would that make in an entire recipe of ingredients?  Yeah, I know.  A lot.  At least when you’re a novice (or a baker), everything counts.  Every thing.

So, what did I do ‘lo these last 22 years as a parent of two?  It certainly wasn’t eating out (much) though we did have pizza week, because if I were on death row, what would I order for my last meal?  I’ve been known to ask people this question. I’d have some Zachary’s cornmeal crusted pizza with black olives, pepperoni, and red onion, and maybe some banana peppers just to kick it up a notch ’cause who cares about indigestion when you’re about to get a lethal injection?

As a parent, and initially a poor parent at that, I fixed a lot of what I knew growing up in the midwest – so I CAN open a mean can of green beans or corn; I can boil potatoes like nobody’s business or fry them or bake them three ways from Sunday.

But then I found that trying something new was relaxing, as long 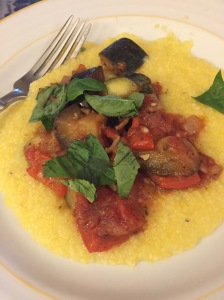 as I wasn’t in a rush to get done.  And I found that perusing cookbooks in bookstores inspired me to want to make things and so I did.  Start. While there were many failures that ended up in the trash after one bite, cooking from a recipe gives me this interesting feeling that I’ve achieved something.  That I was able to create something that is worth eating, just from the effort of my own two hands. 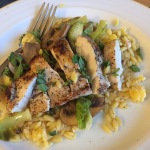 who eat her confections.  I think we’ve all had ‘angry food’ that was hurriedly cooked or warmed up without much care.

And whether you do or don’t want to see or eat what I’ve sprinkled through this blog, I want to tell you “bon appetit.” 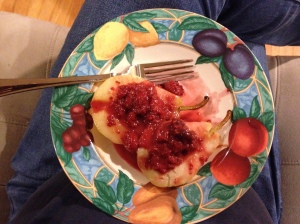 One thought on “Ya, Can Cook”