Putting a mask on today before I left for work.  I would have thought about calling in sick since the air quality is unhealthy, but it’s expected to stay the same unhealthy level for most of this week, so I figured I can’t call in sick everyday.   I wish I could, but work probably has a better air filtration system than the circa 1947 house I live in.

At any time in California’s dry summers, there is a fire risk.  It’s something we live with, like the possibility of earthquakes.  But something is different these last 2 years.

For one, the fires are bigger and faster, spreading like wildfire (this is where the pun initiated) within hours and devastating urban areas, whereas it used to be remote.  Last year in 2017, the Napa fire (officially Tubbs Fire) rained ash on my house and a million of us scrambled to get masks to be able to breathe in hazardous levels.

It almost feels like the sun didn’t come up.

I remember pieces of a sci-fi short story, maybe by Ralph Ellison where a little boy looked outside on a clear day and witnessed a cloud shaped like a hand move to cover the sun. When he told someone, they laughed at his wild imagination. It wasn’t until the next day, where the sun should have risen, that people realized it really had been put out.  Like a match being snubbed.  It got cold quickly, and within a few days…THE END.

As I write this, the next 4 days are predicted to be unhealthy air for sensitive people – children, the elderly and those with lung disease or compromised breathing issues.  That’s me.  Thankfully, I had a few remaining N95 particulate respirator masks left over from 2017 Tubbs Fire, but I’m down to one left.  I should probably order a box because this looks to become a regular occurrence.  Fires are already regular.  Devastating life-taking evacuation urban sweeping fires, like the TWO that are going on right now in North and South California are not.

Since I was already quarantined to the house for an entire weekend, I thought it might be a good idea to pack an emergency bag because you never know where an ember might set off a firestorm that levels towns, kills people in their cars, and alters the future.  All I really really need will be the cats (can’t pack ’em in advance), water and water bowls, food for humans and cats, and medicine for humans and cats.

The sobering truth is that, with a 5-minute or less evacuation notice from fire officials, my lungs would likely shut down from the anxiety or the smoke would get me before I could even leave the house.  I’ve recently read accounts of people who got 20 seconds notice because the flames were already licking the back of the house, and all they could do was leave the door open for the animals to escape and flee. 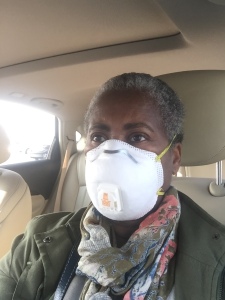 All regions in the US have their natural disasters to contend with…now California has two.

Movies like Mad Maxx or Total Recall or The Road always make me think whether this is the kind of society we’re heading for.  Is this the face of the future?

One thought on “The Face of the Future”