Is it possible that a poem can change your life in 5th grade?  I memorized The Road Not Taken because I had to recite it in class; but I also understood it, and consciously decided then and there that my own path would be the un-obvious one, the less routine, a la more interesting and unconventional life.  Translated into a goal: never do the same thing twice.

That is why I wanted to be an actor, (though these days I may beg to differ that no two movies are the same) but alas, that didn’t happen for me so I rationalize being a project manager…hopefully never doing the same project twice.  (If you do, you should probably be fired.)

Over the years I have recalled this poem often enough to understand and perhaps explain some of my own actions and decisions and outcomes ending somewhere other than where I thought they would. (See project manager, above)

As my daughter’s angst at deciding on a graduate school continued into the final week before due, I spontaneously decided to recite this to her. (Also, yes I am boasting that I can still remember all the words all the way through, though I may slip on a preposition here and there.)

I wanted to demonstrate that seemingly-larger-than-life decisions which sometimes paralyze us into inaction, fearful of making a wrong decision which we are then locked into forever, isn’t really how it works.

I like to think that a decision starts like the trunk of a tree.  It leads one way to start, but then there are multiple branches and just like Robert Frost, The Road Not Taken, one path compared to another isn’t wrong…just different. 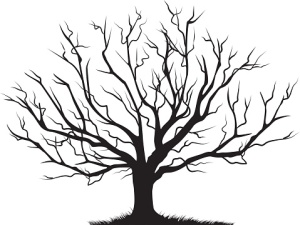 So really, how can one go wrong?*

One thought on “Squirrel”