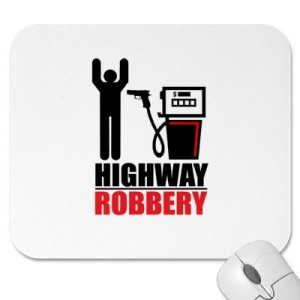 Friends and family know that I don’t watch the news or pay close attention to polls, debates or interviews of political parties hawking their interpretations of every event.  But not being fanatical about government politics is not the same as not being political.  I just realized that.  In that case, I’m very political!  Maybe that’s why my friends just stare at me when I’ve claimed neutrality before.

I do so love taking on big business sometimes.  I won with AT&T, even though it took several months and extreme diligence on my part.  I should have been an advocate (save that realization for another day) because I love to fight.  With words. For the little man – be it an immigrant, the elderly, renters, or puppies.

This week, I wrote the Shell Corporation and blatantly accused one of their gas stations of knowingly overcharging  for the car wash. Norma Rae-esque thoughts of being followed along dark country highways with men clad in flannel wielding tire irons against my hapless Pinto popped into my head immediately before I hit send, but I figured this is worth some corporate oversight about what one of its little rogue children is possibly doing.  Or a little media attention.

After buying a full tank of gas for my hungry gas-guzzlin’ car, I bought the supreme car wash for $10 with purchase, directly at the pump.  Driving up to the car wash to enter the code, I noticed the receipt said $11.  But I just bought $67 in gas, so I’m pretty sure I had passed the threshold to get a $1 discount.  Resolving to remember to go to the cashier after the car wash, I relaxed.

As expected, the clerk looked at my receipt and genially gave me a dollar.  She wanted to keep my receipt, saying she had told the manager “many times” and that he hadn’t fixed it, but I said, “no, I need to write down the totals for banking.”

After going home, I felt unsatisfied.  I had received a refund in all legitimacy, but what if I hadn’t looked closely at the receipt?  I would have unknowingly overpaid, chalking it up to gas totals that are always different; and although a dollar is not a big deal, a dollar per person times how many car washes per day times how many days or weeks this has been going on, seems to point to an unethical businessman who is skimming off the top.  I started to wonder if the manager didn’t know how to change the settings, but they change the programming for a tenth of a cent every time the cost of a gallon changes, at least once a week.  No excuse there.

The more I thought about it, the angrier I became – for all of us (aka the underdog).

So I did it.  I brought attention to myself, for the good of the many.  I sent Shell an email detailing the transaction and my conversation with the clerk.  I asked them to fix it asap and I promised to check in a few days by going to get another car wash with gas purchase.  And if it wasn’t fixed, I promised to contact the local news media.

Do I think this is big business trying to skim off the top of every individual to increase their corporate profits?  No.  I think it is more likely an unethical local franchise owner who thinks he’s found a nice little way to get some extra unnoticed profit for himself.  And at only $1 per customer, who’s gonna make a splash?

4 thoughts on “Shelling Out”